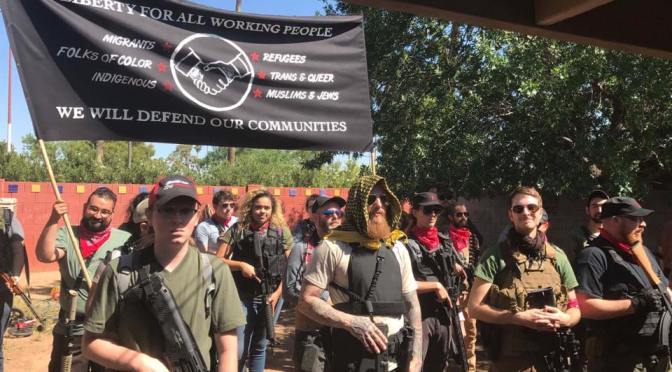 Matewan is an irregular online journal that seeks to build a contemporary analysis on movement and struggle. Namely to try and bridge the divide between politics informed by theory and politics that are informed by lived experience. To address the alienation and the dual realities that exists between the anti-authoritarian movement and the class, and to develop principles and ideas that firmly root the one into the other.  To share what we have learned and to learn what we have yet to experience. To accept that the class is in turmoil and that in the movement’s alienation towards it, we are irrelevant to its development. That as a movement, we must abandon the imaginary regins of destiny that we hold over struggle, and painfully come to terms with the fact that most of our activities are in fact useless.

We came to this understanding not through the observation of struggle, but through critically reflecting upon our participation over the years.  Seeking to understand why it is that in spite of so much time and energy , we are no closer to where we thought we would be. To try to understand why in the age of riots, there is still a clear divide between those who burn cities, and those who organize, protest and sing praise to the former that to them, still remain nameless. It seems that in consciously seeking out a movement for our own emancipation, we cut ourselves off from what made us the ungovernable to begin with. Instead we fell in line as either spectators or as performing artists in the struggle against our own dehumanization.

Yet here we are, living in at a time where most buy into a false sense of growth and escalation. Developments that have more to do with a reaction to the rise of a populist far-right, than it does with the degradation of life and the systemic violence of state and capitalism.  A time when the directors of struggle stand in the ruins of an insurrection (one not of there making) screaming forward, a conscious and principled ant-authoritarian movement must immerse themselves by taking a step back, so that a coherent expression of class conflict can emerge.  We must abandon the illusion of our own grandeur and clearly see what is so obvious. That the “growth” and the left-wing populist response to the right is  nothing to celebrate, the popcorn commonalities we share now will dissipate in 4 years, as the left-populism is clearly driving the “movement” towards the ballot box.

It is in this light that we actually see the movement as having been for the last 40 years stagnated at square one and continuing to do so. If we are to seriously take autonomy to be an indispensable principle of the anti-authoritarian movement, then we need to critically apply that to ourselves, towards our involvement in the conflict between the class and capital and most importantly to our organizing.

Matewan is not intended to be a long standing project. While most of the material published on this site will be original, we nonetheless would like to use this avenue to selectively share the experiences and organizing of others. Particularly those that reflect the dismantling of our alienation from one another and the autonomous organizing of the class.  While we may at time cite articles from the capitalist media, we try not to unless it is unavoidable or in certain cases, relevant to drive the point home. However, regardless of how good the article may be or how “left” it is, we will not re-disseminate the narratives produced by they very same institutions that are so instrumental in capital’s domination over the class.

The material put forth by Matewan, whether penned collectively or individually, were formed through a collective process of discussion and shared experience. Thus the ideas put forward (like all ideas before it) belong to no one. Our hope is that this journal spurs more discussion and that the evolution of the ideas presented are always rooted in a material analysis that can be acted upon. We reject the hierarchical transfer of knowledge and thus firmly reject the totality that is projected in the radical  “common senses” of the academic and institutional left. Yet we acknowledge that those “common senses” are the product of past struggles having been recuperated into a bourgeois logic. A matter of professionals speaking on the struggles of others and that the capitalist left’s exaltation of said professionals, only serves to demoralize and silence those that endured it . Something at times we are all in fact guilty of, given our movements self imposed alienation from the class. Something we hope to remedy by accepting that we are the class, our movement needs to be of and for the class and that it is nothing without it.

As such, we need to find our own way.  We need to continue to develop our own theory and practice. If we are the combatants of the class that truly seek an anti-authoritarian end, then we must assert our autonomy in every manner (in our theory, our organizing, in our material and political relationships…ect)  and with sober minds, honestly asses how it is now that we are not.

These ideas are not static and we sincerely hope that they never become so.

Thoughts on the Autonomy of Struggle

This is a text widget. The Text Widget allows you to add text or HTML to your sidebar. You can use a text widget to display text, links, images, HTML, or a combination of these. Edit them in the Widget section of the Customizer.